Treecreepers really DO creep up trees.

It's a speedy kind of creeping but that's what it is.

However yesterday I watched a male treecreeper working its way to a newly set up birdbath with what could only be called great trepidation.


On arriving at the bird bath it been harassed by a pair of blue wrens and retreated immediately. 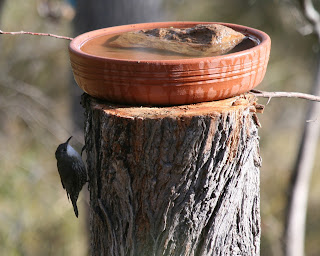 It stayed for a minute or so at the base then gradually worked its way up towards the bowl of water not knowing that the wrens had departed. 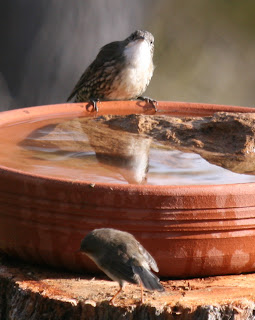 Once at the top,  the treecreeper worked its way around the bowl's edge, and one of the wrens returned but the demeanour of the two was very different this time and the wren skedaddled. 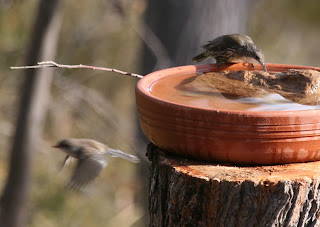 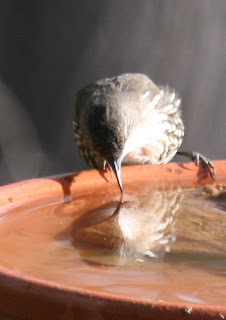 The water was still and the bird appeared to be noting its reflection, touching its beak to the surface of the water several times.

It then took several steps into the bowl and settled down into the water very gently. 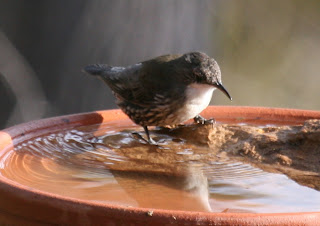 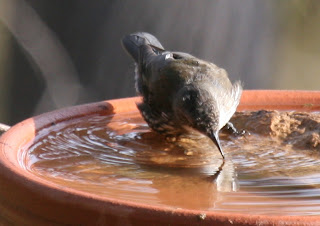 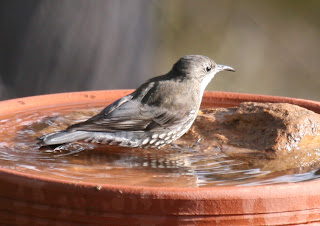 It splashed a little twice and then it flew away! 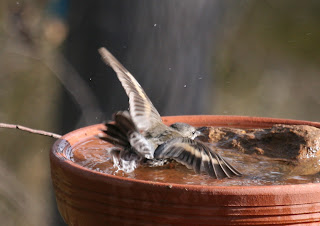 The blue wrens didn't return until another bird came for its bath ... but that's another story. 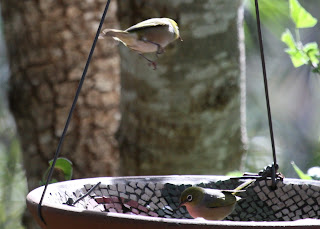 These exuberant little birds come here and leave periodically, but while they are here, they certainly make their presence felt.

During the hottest days just a few weeks ago, they'd dive-bomb (the only word) into the bowl of water put there for birds in general, but THEY made it clear whose they thought it was.

Even the normally assertive New Holland Honeyeaters would wait for the Silvereyes to leave, though with some evident impatience from the wings (sorry).

Now that it is cooler they are zipping through the bush in a small flock of about a dozen.
This straggly un-named plant, which is close to the house and NOT in the "bush", is a current favourite. 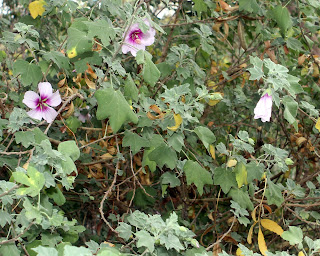 Sometimes they fly, with wings audibly whirring,  in front of a hanging bud, much as a hummingbird is often shown to do. While there they can be heard snipping their beaks at the tiny bugs which cover the buds and the backs of the leaves.

At the moment they ignore the flowers, despite being nectar (and fruit) feeders ... they have certainly benefited from the urban landscape and I understand can be quite serious pests in orchards. 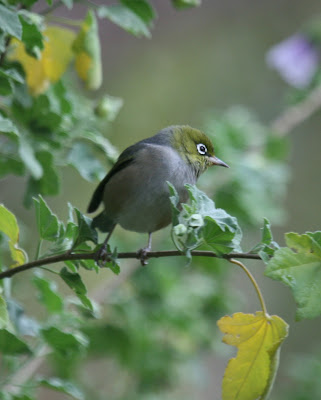 So far I've only been able to catch them in portrait type poses, but one day I WILL catch one on the wing.

It is time I made a start on recording the birds seen on this block, as I have with the plants (with professional help).

Although I am not fond of "staged" bird photos such as those I have taken at the water trays, it helps with focusing and also enables me to see some of the shy ones and so to have them identified.

For the moment though, here is a pair of the resident Bronzewing Pigeons.

"The Common Bronzewing (Phaps chalcoptera) is a species of medium-sized, heavily built pigeon.
Native to Australia and one of the country's most common pigeons, the Common Bronzewing is able to live in almost any habitat, with the possible exception of very barren areas and dense rainforests.
From Wikipedia http://en.wikipedia.org/wiki/Common_Bronzewing
Posted by Remnant :) at 2:06 PM 1 comment:

Arachnids on an Arachnid?

One Huntsman Spider and Many Mites ...and not just mites, according to one source, but mite larvae.

I had a couple of the dead trees that were still standing near the house cut down (and then cut up) for firewood.

When stacking the resulting logs, I found this Huntsman Spider complete with what appeared to be drops of resin so often seen dripping from injuries on gum trees.

Closer inspection revealed what I first thought were ticks. I posted the photos on my flickr page and as so often happens, someone more knowledgeable than I did recognise them as mite larvae.
"Larval forms of these mites are parasitic on various other arthropods, for example harvestmen, but the adults are free-living predators. ... The larvae bite a hole into the cuticula of the host and use a stylostome, which acts like a drinking straw, to drink body fluids dissolved tissues."

The Huntsman I understand to be a Sparassidae species (formerly Heteropodidae).

The mites, according to Wikipedia are Erythraeidae, a family of mites belonging to the Trombidiformes and are entirely new to me. He's (she's?) watching closely.

Two days after placing the log with the spider still on it in a sheltered place UNDER the house, I found it entering the back door

So far as I know it is now comfortably set up, inside here somewhere.
Posted by Remnant :) at 9:22 AM 2 comments: