So who are you looking at?

We have had several (well at least three) days of rain this week.

White-throated Treecreepers, Cormobates leucophaeus, seem to have appeared at the same time, but I am sure it is a coincidence and that neither is the cause of the other appearing ;p).

So far I have only seen females, as indicated by the orange spot below the eye.

Another "so far" is that I have only ever seen two, as far as I know; the one shown above this past week and the one shown at left, this same time last year.


That was also the first time I had ever seen one, although I then realised I had heard it before and been trying to identify the call for some time.

They seem to be very curious creatures, investigating any changes. 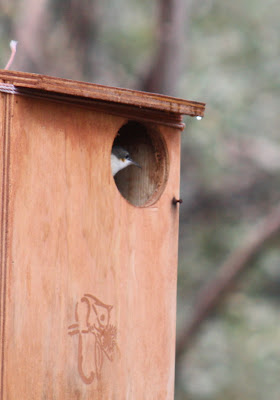 I had placed a possum box up in a tree and within an hour of the Treecreeper showing up it had investigated it, including popping inside and out again several times.

I wonder if they nest in hollows or whether they are drawn to any kind of hollow in their search for food. These two certainly seemed drawn to check out any little holes as they crept up the trees' trunks.


I must read some more of my books (and internet links) and report my findings; with any luck I might see for myself from my glorified bird hide aka my little cottage in the bush.

Pick Me! Pick Me!

I wonder what it is for you?

For me it is books.

All my life books have been my ... what ... let's say most valued, most loved, most enjoyed ... retreat? Whatever.

My mother used to tell of my having swapped my own Christmas present of a doll with my cousin's, whose was a book on that Christmas morning when we were both about 8. I should have taken that early indicator of a career choice more seriously perhaps?
Posted by Remnant :) at 5:11 AM No comments:

No matter how improbable it seems, I first became aware of Australia's native plants as a 20 year old foreigner living in North America; Vancouver, BC, for our first 3 years.

We visited places in the Rocky Mountains, like Whistler National Park (before thre was ANY development beyond rudimentary campsites poked into the forest, Vancouver Island and the Okanagan Valley especially to see "wildflowers", such as the dogwoods.

I learned about the Dogwood being British Columbia's State Floral Emblem and yet still, somehow, the fundamental distinctions of what constituted wildflowers and indigenous plants escaped me.


On our first annual vacation we travelled south down the west coast to California, then striking inland, for the return trip.

In California, we found Eucalypts! We made an unscheduled and emotional stop, got out of the car and could not resist touching them, hugging them in fact.
How home sick we were!

I had no idea which gums they were, indeed, might not then have realised that there were many, but I recall them being smooth-trunked and smelling of home. Thinking back, I would now guess that they were Lemon Scented Gums, E citriodora.

I still did not have any idea about indigenous plants, much less about such notions as "habitat".

After 3 years in Canada we moved to Texas for a year, and yet again it was the wildflowers that caught my attention.

One afternoon, while remarking on the bluebonnets in bloom along the highways, a fellow Australian spoke of how she hadn't really appreciated our own native plants until she had left home.

I recall not understanding what she meant ... and so she explained about bottlebrushes and wattles ... and gums.
At least I recognised those, but it was not until we returned to Australia and lived in Melbourned that I made the same efforts to learn about our own local plants (and joined SGAP) that I began to get the picture!

_Years_ later I returned the the Eyre Peninsula, SA, my own home country, and drove through miles of flowering Hakea francisiana before the penny dropped.


As a child our gardens were extraordinary things, swept bare ground with patches of flowers and shrubs, "hardy" exotics, pampered with bucketed water that was left over after ablutions ... water we really could not spare; geraniums, hibiscus, statice, irises, bridal creeper; and in sheltered corners between the house and the tanks we cosseted precious annuals like snapdragons, linaria and wallflowers, and when we got disourgaged in really dry years, the succulents lasted the distance.

The list could go on but it did not ever (so far as I can recall) include ANY local plant within the house yards of any of my own or my extended family's places.

All that time the Grevilleas and Hakeas and such were completely invisible to me; in fact the only native plant I recall being valued were the quandongs, which we walked miles to collect.

Quandong collecting, like going mushrooming, was a major extended family effort.
2 or three familes would meet at one of the farms and set out for the day.

The large-wheeled wicker baby pram was put to service as we walked miles, filling it with the whole fruit. On reaching home we all peeled the flesh off the stones and laid it out on sheets in the sun until they dried and tipped the stones into a heap by the fence, to be used later in making chinese Checkers games.

The red flesh dried into dark plum-coloured cruchy pieces that were stored in pillow cases and flour bags in the linen press.

This year, 60 years later, I am enjoying preparing and eating dried quandongs again, courtesy of a chance encounter on the internet with a person willing to collect them for me. 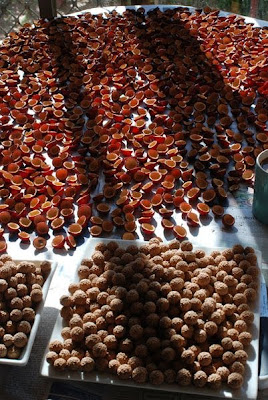 This is roughbarked's photo taken them as he prepared them.
Great memories.
:)

So much learned and so much still to learn, but mostly I feel gratitude for having learned this much to date and being in a position to enjoy the geautiful block I now call home
Posted by Remnant :) at 12:26 AM 1 comment:

Hi Harry and Mary (and Jade too, if you are around),

A friend of mine makes quilts.

Actually, a few friends of mine make quilts.

This is a quilt made by one of them; her internet name is Purple :) 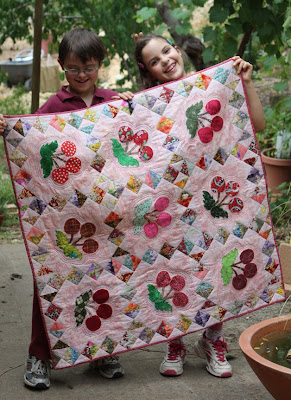 She called it "Life is ... "
When I was about your age my Dad used to sing a song called "Life is just a bowl of cherries", and I think Toni might have been thinking of that song when she named her quilt.

Because Andrew and Midori are such cherry people, I wrote to Purple and bought this quilt for their (then) kitten.

That is how you come to be holding it, so I could send her a photo to show her that we had received it. 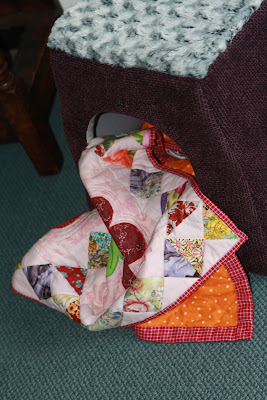 Now it is here in Auckland, just outside my bedroom door, in Stella's little house.

I still love it.
:)
Aee you another day,
NanaJude

PS One of my favourite silly authors wrote, "If life is a bowl of cherries, what am I doing here in the pits?"
Posted by Remnant :) at 2:55 PM No comments: